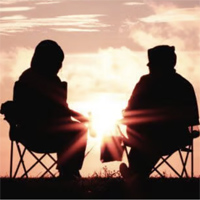 We all have our flaws – me as much, if not more than most. But when I was reflecting the other day about some friend’s children who had turned out well ‘despite’ their troubled upbringing, I wondered if ‘because of’ their upbringing might be a better viewpoint. 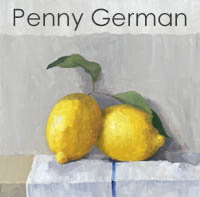 It’s easy to look back at life and lay blame for things that fell short of our expectations, but if we’re relatively comfortable with the person we’ve become, one has to question whether it’s because of those lacks and disappointments that we turned out this way. 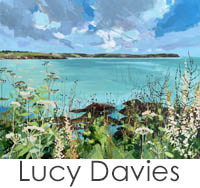 There isn’t one of us that would have done a thousand things differently given our current views, but hindsight is terribly overrated and we’re all just trying to do the best we can given our wisdom today. So blaming another for the things that went wrong in the past surely isn’t the root to inner satisfaction and happiness? 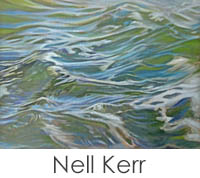 I think the story my Apache Indian friend told me about a son, lamenting with his father about the lack of attention he got from him when growing up, lays it out best:
Father: “Do you know what the job of a father is? To do his best to make sure his children survive.”
Son: “Really? I thought it was so much more.”
Father: “I know, and that’s been the problem all along.” 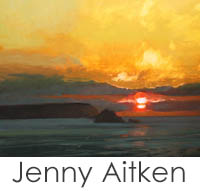 First up, I wanna give a heads-up to the fab Jenny Aitken whose last exhibition day is today. There’re some astonishing work and many sold, so I hope you can make it, virtually, if not in person. And talk about hot-off-the-press, these two new Lucy Davies’s just made it under the wire to this month’s newsletter. I’m glad they did, too as I’m pretty sure they’ll fly… just like most of her work. 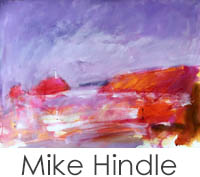 I doubt this newbie from Claire Henley of Porthcurnick Beach will hang around long, either. Her inimitable style is aching from every brushstroke in this corker and it’s just one of a fabulous collection on her page. And Mike Hindle popped back from France to bring these astonishing new works in. Now THAT’s service!

The Hig has been extremely prolific too, this month and it’s just as well as his work has been selling as fast as a shark on a jet ski! And I just knew you’d love Nell Kerr’s work. I was right, too. She sold two before they even got off the mark so here’re two more ocean works for you to drool over… I know I did! 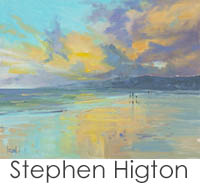 Jamel Akib blew us all away with these four new crackers. So much so, one sold before we even got it on the wall, but this delicious comestible of Portscatho is still available! And on the subject of Portscatho, don’t you just love this tranquil scene of the fishing boats in the porth from Ann Kelly? I know, right? Gorge! 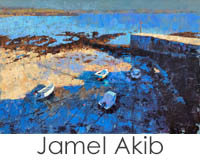 I wanted to gush about this beautiful new Ben Taffinder that just hit his page, but it was sold almost before it came in. But there’re more here soon ad I believe some still lifes which always sell fast, so keep your eyes peeled on his page! And everyone’s favourite dedicated still life painter, Penny German smashed it out the ballpark with these four new works. One has already gone, though, so best be quick, folks! 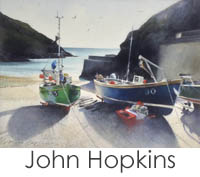 The king of watercolours, John Hopkins painted this drop-dead gorgeous rendition of the Portloe working boats. Another blinder! And Howard Moody’s craftsmanship is astounding at the best of times, but this new collection even surpasses that accolade. Phew! 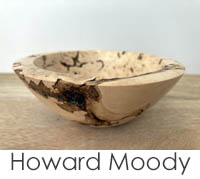 And to finish off the month, Hester Berry sent down four new pieces. One of them a rare watercolour, so I just had to share this here along with the only oil she has left from this collection. Well, I did say our artists sell quickly, and Hester’s no different! 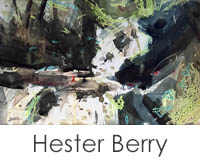 So there it is, me dears. Our next exhibition (after Jenny’s cleaned up her crisp wrappers) will be with Mr Taffinder on 3rd June, so more about that next month. But you’ll find all our exhibitions here if you wanna plan your dairy.

In the mean time, thanks as always for being you, and the world’s best gallery team and I look forward to seeing you soonest!

There’s an elephant in the room this month that I can’t ignore, but I was deeply moved by the statement of a local there who said: “This morning, I was expecting to plant tulips and daffodils in my garden. Instead, I find myself learning how to shoot and am taking up arms.”

From the comfort of my privileged world, I can only imagine how it would be to wake up in a country being rocked by bombs with my livelihood and home under threat. So, to counter this in a non-political way, I decided to animate the art world, who I knew would be eager to do something positive to counter the negativity… read more